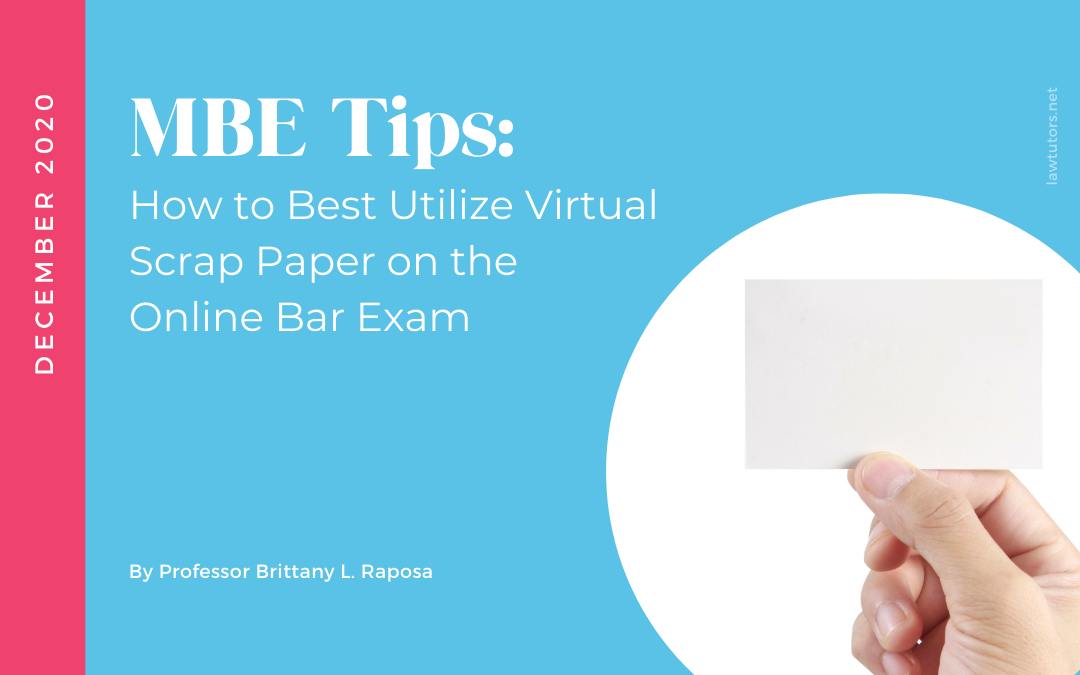 Being able to write on multiple-choice questions comes in handy when you need to diagram something, like in a civil procedure or real property question. If you need to map something out, you can utilize your virtual scrap paper to do so. Let’s see how this works with a sample question below.

Does the federal court have jurisdiction?

This was one of those questions where you just have to draw it out to make it work. Although you don’t have scrap paper, you can and should use your virtual scrap paper to diagram this out. Do it very shorthand, almost like a math equation, like I did on my sample virtual scrap paper! The call of the question asks me if the federal court has jurisdiction, so I know that I’m looking for whether the court has subject matter jurisdiction here (federal question or diversity). Since it’s a negligence claim, I’m looking to see (1) whether the parties are diverse and (2) whether the amount in controversy is over $75,000. From my diagram on my virtual scrap paper, I can clearly see the answer is no. Although the plaintiffs (D for driver and P for passenger) are diverse from the defendant (W for woman), the amount in controversy is not met because not a single plaintiff has an amount in controversy over $75,000 against a single defendant. Therefore, my diagram clearly allows me to see that the answer is A.

A creditor received a valid judgment against a debtor and promptly and properly filed the judgment in the county. Two years later, the debtor purchased land in the county and promptly and properly recorded the warranty deed to it. Subsequently, the debtor borrowed $30,000 from his aunt, signing a promissory note for that amount, which note was secured by a mortgage on the land. The mortgage was promptly and properly recorded. The aunt failed to make a title search before making the loan. The debtor made no payment to the creditor and defaulted on the mortgage loan from his aunt. A valid judicial foreclosure proceeding was held, in which the creditor, the aunt, and the debtor were named parties. A dispute arose as to which lien has priority. A statute of the jurisdiction provides: “Any judgment properly filed shall, for ten years from filing, be a lien on the real property then owned or subsequently acquired by any person against whom the judgment is rendered.” A second statute of the jurisdiction provides: “No unrecorded conveyance or mortgage of real property shall be good against subsequent purchasers for value without notice, who shall first record.” 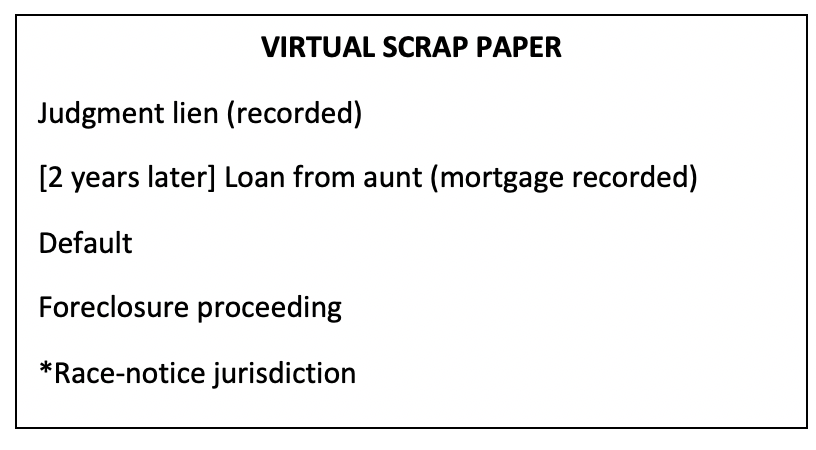 With real property questions, where you typically need to draw out conveyances and different liens, it’s best to put them in a checklist and timeline fashion. For example, in this question, we have a judgment lien that was recorded, and then two years later, we have another loan and mortgage taken out on the land, which was also recorded. Then, we had a default and a foreclosure proceeding. I also noted which type of jurisdiction I am in – a race-notice jurisdiction, to complete my timeline and so I could visualize the problem. The call of the question says I need to determine who has priority, and everything is in my timeline for me to answer this question. A race-notice jurisdiction protects a bona fide purchaser for value without notice who records first. The creditor filed first in my timeline, giving the aunt, who comes second, constructive notice of the judgment lien. A mortgage lien does not automatically have priority over a judgment lien, so the answer is C.

Your diagrams can be done on your virtual scrap paper – although it might look a little different than when you draw it out on pen and paper. Practice making these types of visuals when doing MBE questions for those that need to be mapped out!

For some questions, diagrams aren’t necessary, but spotting issues within the margins of the fact pattern is helpful. Even though you cannot do that, near the question, you can use your virtual scrap paper to help you. Let’s look at an example of a question below.

A defendant is tried on a charge of driving while intoxicated. When the defendant was booked at the police station, a videotape was made that showed him unsteady, abusive, and speaking in a slurred manner. If the prosecutor lays a foundation properly identifying the take, should the court admit it in evidence and permit it to be shown to the jury?

While I’m reading the fact pattern, I am taking notes about what is pertinent. Here, it’s an evidence question, so I’m looking to pull out the charged crime and the evidence sought to be used. When I do that, I can see that it is relevant because a video of someone acting unsteady, abusive, and speaking in slurred speech would demonstrate someone was intoxicated. Because I think the question is testing relevancy, the 403 balancing test needs to be analyzed – whether the probative value of the evidence is outweighed by the danger of unfair prejudice. Because it is a videotape actually portraying the defendant, a court would probably not find that it is extremely prejudicial, especially given the video’s high probative value in showing that the defendant is, in fact, intoxicated. So, the answer is B. What did I do here? I couldn’t take notes on the side of the question on a test booklet, but I could take notes on which issues I spotted while reading the facts, which can be extremely helpful.

Keeping Track of When to Go Back 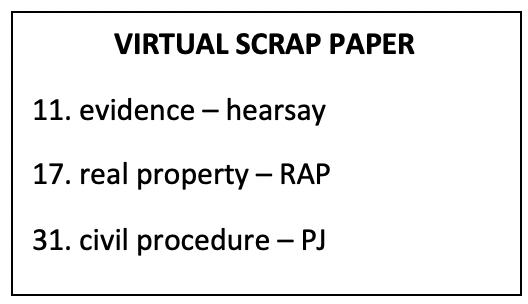 It’s also a good idea to make notes on which questions you would like to go back to and why on your piece of virtual scrap paper. Let’s look at an example of what this could look like.

On my virtual scrap paper, I’m not only making a list of questions I want to go back to, but I’m also putting down the subject and topic I think the question is testing. Why? As I go through other questions, I may get another question with the same or a similar topic, and it may make me remember a rule or answer I need for one of these questions. When I’ve gone back to the question, I can remove it from my list on my virtual piece of scrap paper.

Do you need more MBE help? Check out our LIVE group workshops that we host for the bar exam to help students increase their MBE scores! If you don’t want to be in a group, check out our one-on-one bar exam tutoring packages!

Other related articles that may be useful:

A Quick Guide to Taking the February 2021 bar Exam Online

if you would like to watch our webinar from December 2020, you can see it here: Studying for an Online Bar Exam During a Pandemic